We discuss the short and long-term effects alcohol use quite regularly on this blog, due to the addictive and deadly nature of the substance. Make no mistake about it, while people have more negative views about other drugs like meth and heroin, alcohol is the number one offender. You need to look no further than the data to see the realities of alcohol use in the United States.

Nearly ninety-thousand Americans pass away each year in the United States from alcohol-related illness or injury, according to the National Institute on Alcohol Abuse and Alcoholism (NIAAA). Adults consume a severe amount of alcohol via binge drinking, a whopping 17 billion alcoholic-beverages/ per year, according to the Centers for Disease Control and Prevention (CDC). The dangerous practice of binge drinking, four drinks for women and five drinks for men—in about 2 hours, can cause grave problems in a person’s life. What’s more, the CDC reports that 80 percent of binge drinking involves males.

While adults engaging in binge drinking is cause for significant concern, many teenagers also drink as much as they can, as quickly as possible. People take high risks when they binge drink, and afterward, i.e., fighting and drunk driving. Young people who avoid run-ins with the law are not out of the woods; people who develop unhealthy drinking practices when they are young are more likely to experience problems with the substance later on in life.

Educating People About Alcohol Use and Recovery 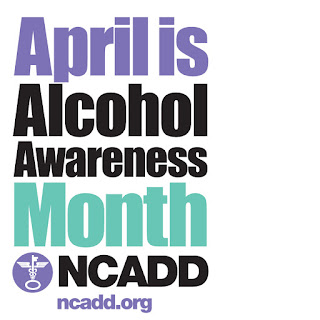 As we all make our way through April, hopefully, you can find time to take part in some of the events happening around the country for Alcohol Awareness Month. Established in 1987 to help reduce the stigma associated with alcohol use disorder and addiction, The National Council on Alcoholism and Drug Dependence (NCADD) hopes to educate Americans about alcohol, alcoholism, and recovery.

Young people and parents, alike, need to have all the facts if they are going to prevent unfortunate outcomes relating to alcohol use. It’s no secret that many mothers and fathers allow their teen children to practice provisional alcohol use; that is, condoning drinking as long as it is done safely, like at home for instance. It may seem like parents are teaching teenagers responsible alcohol use; however, there isn’t evidence to support the conclusion that drinking at home spares young people from alcoholism and alcohol-related injury.

Study after study supports the idea that there isn’t such a thing as safe alcohol consumption. Sure, not drinking and driving is safer than the alternative and moderating is less dangerous than binging; but when scientists look closely, even small amounts of alcohol use can have ruinous effects. Parents can play an instrumental role in helping their children avoid injury, addiction, and heartache down the road.

“Changing Attitudes: It’s not a ‘rite of passage.’”

The theme of this year’s Alcohol Awareness Month is, “Changing Attitudes: It’s not a ‘rite of passage.’” NCADD points out that parents regularly chock up underage drinking as a “rite of passage;” the organization cites research which indicates that when parents talk to kids about the dangers of alcohol and drugs, they are 50 percent less likely to use mind-altering substances.

“Alcohol and drug use is a very risky business for young people,” says Andrew Pucher, President and CEO of NCADD, “and parents can make a difference. The longer children delay drinking and drug use, the less likely they are to develop any problems associated with it. That’s why it is so important to help your child make smart decisions about alcohol and drugs.”

Everyone can take part in events occurring across the country this month; or, you can turn to social media to spread the message about the dangers of alcohol. It’s worth remembering that after tobacco and poor diet, alcohol use is the third leading cause of preventable death in the U.S. It is crucial that society treats people struggling with an alcohol use disorder with compassion; alcoholism is a treatable mental health condition and long-term recovery is possible with help.

Hope By The Sea can help any adult who is struggling with alcohol use disorder; please contact us at any time to learn more about how we can assist you or your loved one. Treatment works; recovery is possible!