Global Statistics on Alcohol, Tobacco, and Illicit Drug Use

In the United States, the general public harbors a good number of misconception about the use of mind-altering substances. For myriad reasons it’s easy to convince oneself that moderate use of cigarettes and alcohol won’t lead to complications in the future; the same holds true regarding so-called “hard drugs.” Today, most Americans grasp that opioids of any kind are addictive and dangerous; however, while the risks of opioids are real, the majority of Americans fail to realize that the most hazardous substances are legal for adults, e.g., tobacco and alcohol.

Some individuals may find it hard to believe that the most significant cause of mal health globally is alcohol and tobacco, but it is the case. Part of the reason why it is easy to think that other substances like heroin and cocaine are the most significant cause for concern is due to the optics. Without fail, the news media covers the heavy toll opioids are taking on America each day; journalists proffer grisly statistics and anecdotes about the epidemic claiming roughly one hundred lives per diem. That’s not to say that reporting on the opioid addiction crisis is not a public service, everyone’s eyes should be open to this subject; although, society should be paying equal (probably more) attention to the costs smoking and drinking.

Most people’s introduction to vice involves cigarettes and alcohol; initiation typically occurs in high school or college. Due to the ubiquitous nature of liquor, beer, and wine it is difficult to gauge what is safe, meaning: how often and how much “booze” is OK? One need only attend a sporting event or meet friends at the pub on Friday to espy Americans engaging in unsafe drinking practices. Since people set personal parameters off their peer’s consumption, it is a simple matter, in fact, to fool oneself into thinking that their relationship with alcohol is healthy. It is vital the public be made aware of the inherent dangers of even moderate alcohol use; perspective can spare individuals much heartache down the road.

The Dark Side of Alcohol and Tobacco Use 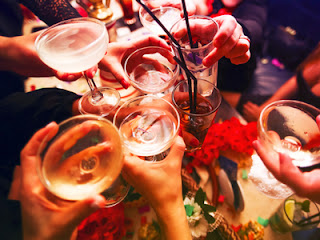 While your average American has no illusions about the dangers of tobacco, the same is difficult to say about liquor. What’s more, just because the Western World is wise to cigarettes doesn’t mean the same is valid around the globe. Even with falling smoking rates for decades here at home, tobacco is among the top three causes of preventable death. All told the mental and physical toll that legal substances take is catastrophic.

The Global Statistics on Alcohol, Tobacco, and Illicit Drug Use: 2017 Status Report offers a snapshot of what causes the most harm and should help direct prevention and treatment approaches. One-in-seven adults smoke and one-in-five drink around the world, The Independent reports. Smoking and drinking are responsible for ten times more healthy life lost ( a quarter of a billion hours of life lost each year) than that of all illicit drug use combined, according to the research appearing in the Journal of Addiction.

“Smoking and alcohol are always well ahead [of illicit drugs], there’s nowhere that it even comes close,” said Professor Robert West of University College London, one of the report’s authors. He adds, “If we’re going to make the impact we really want on death rates, we need to address the cultural normality of it all.”

Rather than give readers a rundown of which country is drinking the most or which is smoking the most, it is more salient to highlight Professor West’s point about “cultural normality.” Many people hold the belief (at least when it comes to alcohol) that imbibing is just a part of life. Some delude themselves into thinking that everyone drinks; such a mindset can lead one to believe that drinking couldn’t be that harmful. Yes, spirits are a part of life, but they are far from harmless; over 80,000 Americans die of alcohol-related illness each year. While most people do not develop an alcohol use disorder, over 15 million adults do struggle with AUD.

Any way a person cuts it, alcohol and tobacco are far deadlier than any illicit drug. It is paramount that lawmakers acknowledge the facts of the Global Statistics on Alcohol, Tobacco, and Illicit Drug Use when shaping policy. Far too often, what begins as a rite of passage becomes a death sentence.

If you are struggling with an alcohol and tobacco use, please contact Hope By The Sea. We can help you begin the process of recovery and provide you with the tools for achieving lasting progress.