There isn’t a minimum age restriction on developing an addiction, many people’s struggle with the debilitating mental illness starts in adolescence. While we don’t treat minors at Hope By The Sea, we have a vested interest in advocating for drug and alcohol use prevention. Problems people face in adulthood, in many cases, begin in high school; use disorders can develop right under the nose of parents, and many young people do not view their behaviors as problematic.

High school is a difficult time for everyone, even those who have the benefit of popularity. What is going on just beneath the surface isn’t always apparent. It’s not rare for people who have unhealthy relationships with drugs and alcohol to eke out straight A’s still. The point is that identifying who is struggling with substance use isn’t always so easy. Even when there appears to a problem, it’s not hard for people to chock it up to teenage rebellion—behaviors that an individual will shake off down the road. 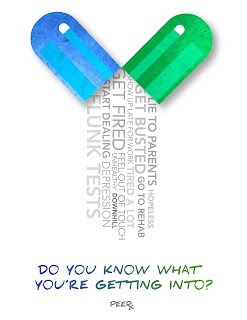 It’s also worth pointing out that young people often convince themselves they are too “young” to have an issue. Throughout the country, high schoolers congregate on weekends to imbibe alcohol, smoke pot, and some even experiment with cocaine at parties. For most teens, their weekend partying doesn’t lead to a substance use problem. Not all teens are so fortunate and, in those cases, slowly but surely, weekend drug and alcohol use spills into one’s school week.

There are teenagers who know that their behavior is likely going to lead to problems, i.e., dependence; however, the majority of young people who develop substance use disorders do not understand how much is at stake. It’s absolutely vital that adolescents have all the facts before they begin down a slippery slope toward addiction.

National Drug and Alcohol Facts Week (Monday, January 22nd through Sunday, January 28th) is a health observance week for teens that aims to SHATTER THE MYTHS® about drug and alcohol use. Throughout the United States, events are taking place daily to educate young people about the risks of using mind-altering substances. Please take a moment to watch a short video of the heads of NIAAA and NIDA, Dr. George Koob and Dr. Nora Volkow:

Agencies like NIDA, are fully aware that young people have a significant number of misconceptions about alcohol, tobacco, and marijuana; such substances are often precursors to progressing to “harder” drugs. For instance: teens are inclined to think pot is safe because it is socially accepted and legal in various states. While cannabis is undoubtedly less harmful than say, heroin, the drug is habit forming and can lead to addiction. It’s vital that everyone has scientific facts before they choose to experiment.

If your substance use during adolescence led to addiction in adulthood, you are not alone—help is available. The sooner you seek assistance for an alcohol or substance use disorder, the better. Please contact Hope By The Sea to begin a life-saving journey of recovery.