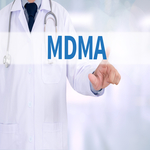 Ecstasy is a popular drug among young adults, especially within the club and festival scene. Historically, the drugs ingredients MDMA (3,4-Methylenedioxymethamphetamine) would be mixed with other adulterants and pressed into pills for consumption. A person who takes an ecstasy pill can expect to experience intense euphoria and mild hallucinations, the desired effect of use. However, the drug is also accompanied by several other, even potentially dangerous side effects, such as:

Today, ecstasy pills are less desired with users desiring what is known as “Molly,” a version of the drug in powdered form that many users believe to be pure MDMA (adulterant-free). While there are occasions of people using pure MDMA, most of the Molly being consumed is far from pure. People attending raves, and electronic dance music festivals should be made aware of the fact that there is no way of knowing exactly what is mixed in with their MDMA, ingredients that could be deadly. Long-term MDMA use can lead to cognitive impairments, depression and anxiety even after discontinuing use of the drug.

Ecstasy is considered to be far from safe, just like other mind altering substances there is still a lot we do not know about MDMA’s effect on the brain. However, it is possible that the drug may prove useful for the treatment of certain mental health disorders, such as post-traumatic stress disorder (PTSD). The treatment of PTSD is extremely important, as it is a debilitating mental illness that affects millions of Americans.

In light of Veterans Day, which was observed earlier this month, PTSD treatment is on the minds of many people.  In fact, the U.S. Food and Drug Administration (FDA) granted permission for large-scale, Phase 3 clinical trials of MDMA for the treatment of PTSD, The New York Times reports. The decision came in the wake of some promising findings from earlier research, when MDMA showed to be an effective treatment for some combat veterans.

“It changed my life,” said C. J. Hardin, who served three tours in Iraq and Afghanistan. “It allowed me to see my trauma without fear or hesitation and finally process things and move forward.”

Hardin had basically given up on life, being unable to function despite trying numerous forms of therapy and medication, according to the article. His PTSD led to the end of his marriage, alcoholism and suicidal ideations. The effective outcome of Hardin using MDMA to treat his PTSD, and others like him, led to the FDA’s approval for further clinical trials. However, researchers are somewhat skeptical about this course of action.

“I’m cautious but hopeful,” said leading PTSD researcher, Dr. Charles R. Marmar, head of psychiatry at New York University’s Langone School of Medicine. “If they can keep getting good results, it will be of great use. PTSD can be very hard to treat. Our best therapies right now don’t help 30 to 40 percent of people. So we need more options.”

It will be interesting to see which way further study will go, and we will be sure to continue following this important story.