War On Drugs Opponent Passes Away

A recent article from VICE takes a close look at the role of the United States in shaping global drug policy; and, whatever people’s views are on the subject of prohibition, it is hard to deny that America has led the way going back to the 19th Century. Just following the turn of the 20th Century, the “idea of international control of the drug trade had been born, the brainchild of the openly racist Episcopal bishop of the Philippines,” Charles H Brent. In 1905, Brent was able to create America’s first prohibition regime in the Philippines, after we conquered the island nation during the Spanish–American War. Brent called opium use an “evil and immoral” habit.

History tells us that prohibition and international drug control policy – criminalizing drug use and addiction – has more to do with racism than the public well-being. America was behind the first International Commission on Opium in Shanghai, and one of our representatives was none other than Charles H Brent. For the next 100 years, American pressure and influence would be the force behind practically every international conference and commission on drug control.

Fast forward, most Americans living today understand, to at least some degree, that the American war on drugs does far more harm than it helps. In our country, we imprison more people than any other nation by far; and, not surprisingly, the majority of individuals serving time are nonviolent drug offenders. Since the people who spearheaded efforts to criminalize drugs relied on hate, prejudice, fear mongering, and rhetoric propaganda to get the public on board with the idea throughout history, it’s not surprising that there is a massive racial disparity in prison demographics.

“[Global drug] policy, moreover, derived from some of the ugliest and most shameful threads in US history itself,” writes JS Rafaeli, author of the VICE article. 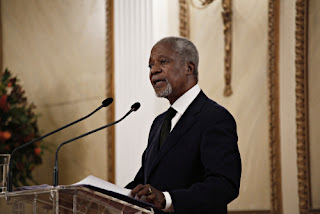 The VICE article was published earlier this week, and its author couldn’t have predicted that one of the loudest critics of the global war on drugs would pass away today, August 18, 2018. Kofi Annan, a diplomat from Ghana, who served as the seventh secretary-general of the United Nations, “passed away peacefully on Saturday after a short illness,” the Kofi Annan Foundation announced. The first black African to become UN secretary-general, was 80 years old when he died in Switzerland.

In honor of Annan’s tireless effort to end the stigma and criminalization of drug use and addiction around the world, we felt it important to share some of the Nobel Peace Prize winner’s ideas about the war on drugs. In 2016, the progressive thinker wrote an op-ed published in Der Spiegel. The former secretaries-general wrote, “The tendency in many parts of the world to stigmatize and incarcerate drug users has prevented many from seeking medical treatment.”

He called for four critical steps to refocus the UN Convention on Narcotic Drugs’ mission:

At Hope By The Sea, we would like to extend our heartfelt condolences to Annan’s wife and three children.

If you or a loved one is struggling with an alcohol or substance use disorder, please reach out to Hope By The Sea to discuss treatment options. Our team of addiction medicine professionals can help break the cycle of addiction and provide the tools for leading a life in recovery. The miracle of recovery can be yours too.