Doctor In Recovery Gives Back 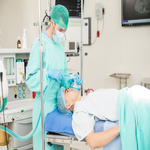 Doctors are no strangers to the slings and arrows directed at them by critics of their prescribing practices. They are quite often held responsible for the state of prescription opioid and subsequent heroin abuse across the country. While such accusations are not entirely without merit, it can become easy to forget that many doctors have them self been affected by opioid addiction. More physicians than you might think have made the choice to sample the painkillers they prescribe to patients. And like many patients, such a choice has led doctors to dependence and addiction.

Health care providers who find themselves in the grip of addiction are at risk of losing everything. Not the least of which is their license to practice medicine. Doctors who abuse their powers to prescribe can also face criminal charges for such wrongdoings, potentially facing jail time. It may be fair to say that the stakes regarding one’s career are especially high for doctors with substance use disorders.

It is worth taking a moment to point out that some of those same doctors who nearly lost everything to addiction, manage to find recovery. And they set themselves to the task of helping others who fell victim to the drugs doctors prescribe. A perfect example is former anesthesiologist, Dr. James Follette.

Dr. Follette became addicted to fentanyl in 1987, which almost ended his career in medicine, Syracuse reports. Now, with ten-years sober, Follette has been treating opioid addicts since 2009. He understands firsthand how difficult it is to achieve long-term sobriety or clean time, having gone to multiple treatment centers, experiencing multiple relapses. Because of which, Dr. Follette can no longer work as anesthesiologist.

The former anesthesiologist pulled himself together with the help of the 12-steps and volunteer work. He went on to earn a certification from the American Board of Addiction Medicine to practice addiction counseling, according to the article. Follette says that he is grateful that he was caught and that he loves what he does today.

“Whatever happened to get me to where I am today, it was worth it,” he said. “I look at it as God doing for me what I couldn’t do for myself.”

Naturally, Follette is one of many physicians, especially anesthesiologist, who have been impacted by addiction. Dr. Brad Hall, president of the national Federation of State Physician Health Programs, points out that about 10 to 12 percent of physicians become addicted to drugs and/or alcohol. Regarding anesthesiologists, Hall says:

“You can look at the access to very potent drugs in the anesthesia field and a misperception that the knowledge about these drugs is protective and anesthesiologists get very comfortable with using extremely powerful, potentially addictive substances and underestimate the addictive potential of these drugs.”