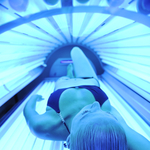 Not everyone in the United States lives in a climate like Southern California, Arizona or Florida. Climes around the country are far from consistently sunny, much of the year in some places are typified by rain or snow. For those who like to have a copper hue year-round, they usually rely on the assistance of ultraviolet rays via a tanning bed. The practice is somewhat controversial, because it has been associated with various forms of cancer—specifically melanoma. Nevertheless, millions of Americans visit tanning salons, sometimes on weekly basis.

The reasons why people tan vary, some just like the way being tan looks. For many people image is of the utmost importance, and being ashy or pale is not an acceptable appearance. Concerns about physical appearance can be harmful to one’s health in extreme cases. People often exercise in unhealthy ways to cope with their perception of how they look, whether the flaw exists or not. Left untreated, body dysmorphic disorder (BDD) can wreak havoc on one’s life. The DSM-5 categorizes BDD in the obsessive–compulsive spectrum.

There is also a significant number of Americans who suffer from Seasonal Affective Disorder (SAD), commonly referred to as seasonal depression. While the condition can affect people during the summer, it is usually associated with the winter months when natural vitamin D happens to be in short supply. SAD patients will use tanning beds in an attempt to change their current mood.

Aside from the potential for cancer due to tanning, most view the practice as being relatively benign (no pun intended). However, there has been a growing body of evidence suggesting that tanning can become an addiction. There may also be a relation between tanning dependence and other harmful disorders, such as alcohol use disorder.

New research from Yale University showed that people with tanning dependence were six times as likely to be dependent on alcohol, according to a press release from the Yale Cancer Center. People with tanning dependence were five times more likely to show signs of “exercise addiction” and three times more likely to experience SAD. The findings were published in the Journal of the European Academy of Dermatology and Venereology.

“People who are tanning dependent could also be assessed for SAD,” said Brenda Cartmel, Ph.D., the paper’s lead author and senior research scientist and lecturer in the school’s Department of Chronic Disease Epidemiology. “There are ways of addressing SAD other than indoor tanning. Regarding the alcohol dependence association, it may be possible that addressing that behavior could help address tanning dependence.”

It is often said in the rooms and centers of addiction recovery that if you’re addicted to alcohol, you can also become dependent on another substance or behavior. Many a recovering addict has experienced the pitfall of adopting new addictions in the place of another. It is important that one practice moderation even when an activity is inherently safe. Developing unhealthy relationships with other activities can actually result in a return to the harmful behaviors which brought one to the rooms of recovery in the first place.

It can be easy to put off the work of recovery by focusing on other activities, sometimes in the name of living a healthier life; that in the long run may have a harming effect on both mind and body.