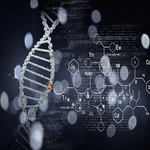 While co-occurring disorders are extremely prevalent among addicts and alcoholics, there is not a whole lot of research that shines a light on why that is the case. To be sure, a large percentage of people with untreated mental illness will resort to using drugs and alcohol to self-medicate their disorder. It is a behavior that can quickly spiral out of control, and in turn lead to addiction. Yet, it is possible the common trend of co-occurring disorders among people with substance use disorder, could be the result of things happening at the molecular level, i.e. DNA.

A new study, published in the journal Frontiers in Genetics, showed that a person’s genetic risk for mental illness could be tied to a person’s risk of abusing drugs or alcohol, ScienceDaily reports. The research is novel because it is the first time researchers have compared genetic risk for mental illness with substance use involvement with a group of people with no family relation. Study lead author Caitlin E. Carey, a PhD student in the BRAINLab at Washington University in St. Louis, says:

“Previous research on the genetic overlap of mental illness and drug use has been limited to family studies. This has made it difficult to examine some of the less common disorders. For example, it’s hard to find families where some members have schizophrenia and others abuse cocaine. With this method we were able to compare people with various levels of substance involvement to determine whether they were also at relatively higher genetic risk for psychiatric disorders.”

The breakthrough study could eventually have major implications in the field of addiction medicine. It can lead to new research that looks into the “predictive power of genetic risk.” In the future, researchers may be able to tie specific drug use risk with specific mental health disorders.

“Our research shows that if someone is genetically predisposed towards having mental illness, they are also prone to use licit and illicit substances and develop problematic usage patterns,” says Carey. “This is important because if a mental illness, like depression, runs in your family, you are presumed at risk of that disorder. But we find that having a genetic predisposition to mental illness also places that person at risk for substance use and addiction.”

The new research was published at a fortuitous time, considering that it is currently Mental Health Awareness Week, which is especially important to us at Hope by The Sea. We hope that everyone in the field of addiction medicine and beyond will join the with the National Alliance on Mental Illness (NAMI), and pledge to be #StigmaFree. Let’s work together to replace stigma with hope for everyone out there suffering from any mental illness.