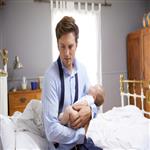 Bringing life into the world is a major event, one often associated with joy. After all, childbirth or adopting a baby is one of the prerequisites for building a loving family. While having a child is often an important part of a happy life, sometimes it can have the opposite effect on one’s psychological well-being.

There is a good chance that you are familiar with pre- and postpartum depression in mothers. You may also be aware that mothers whose depression goes untreated can put both the baby and mother at risk. New fathers need to aware of the emotional state of their partner both during and after a pregnancy. If abnormal behavior appears, intervention may be needed.

Yet, there is a growing body of research indicating that an eye should be kept on expectant and new fathers, as well. Studies have shown that fathers are at risk of developing symptoms of depression before and after birth, which can lead to all kinds of problems.

A study published in the Journal of Child Psychology and Psychiatry found that a father’s depressive symptoms can have an impact on the mother and child, CNN reported. The lead researcher in the 2008 study, Dr. Michael Weitzman, professor of pediatrics and environmental medicine at the New York University School of Medicine, points out that new fathers suffering from depression can result in added stress, depression or increased use of alcohol or smoking for the mother.

You may think that prenatal and postpartum depression in fathers is rare. However, when researchers analyzed data on 3,523 men in New Zealand who participated in the Growing Up In New Zealand study, they found that such cases were not all that rare, Fox6 reports. The study was published in the journal JAMA Psychiatry.

“The rates of antenatal and postnatal paternal depression that we found are consistent with previous similar studies in other countries including the US,” said Lisa Underwood, a research fellow at the University of Auckland in New Zealand and lead author of the study. She adds: “Our key message applies worldwide: Pregnancy and the postnatal period are key opportunities to engage with expectant and new fathers to discuss depression symptoms and provide support.”